My Guest Appearance On WPRPN Episode #121 - Sept 11th Round Table

WON'T ANYONE ACTUALLY THINK OF THE CHILDREN?!?

Yes, I've been away for a bit. I've expanded my social media footprint. Of, course, you know of MINDS. I've gone elsewhere, as well, but that's neither here, nor there. The issue this day is CHILDREN.

Do you TRULY CARE?!?

Let's test out that theory:

You can read the rest at the URL, but I'll include just this line:


Despite Stacy having a heartbeat of 200 to 230 beats per minute the pediatrician told her parents that she was fine and that she was probably suffering from gastroenteritis (an illness that this little girl had been vaccinated against!).

Why couldn't this doctor detect a CLEAR AND PRESENT DANGER TO THOSE CHILDREN?!?

He couldn't SEE any danger...not with the DOLLAR SIGNS IN FRONT OF HIS EYES.

You see, doctors are PAID BONUSES for loading up children with vaccines. Don't believe that? Look it up.

Before I get on with the focus of this piece, let me be clear: I'm not telling you NEVER TO VACCINATE YOUR CHILDREN; I am advocating that you DO NOT ALLOW FOR MORE THAN ONE SHOT AT A TIME, if you do vaccinate.

Here is a White House petition, far short of its goal of 100,000 signatures:


We, As a Country of Human Beings and Americans MUST stop the needless slaughter and blood Sacrifice of our Children! Our UNBORN CHILDREN!! Please URGE and FORCE and COMPEL Congress to set the law straight and OVERRULE the Illegal Roe V Wade agreement that the Supreme Court put in place in 1973. There have now been almost 60,000,000 (60 Million) babies murdered since Roe V Wade was put in place. That is 60 million taxpayers that would have had children and grandchildren to the tune of likely 150 million total human beings just here in this country! And the bloodshed continues at a rate of 3000 a day! IT MUST BE STOPPED!! To stop the calamity IT MUST BE STOPPED!! I ask the President to COMPEL Congress to set the Law right, then President TRUMP to SIGN IT!!

I want for all of you to KNOW that Planned Parenthood's role in the process is nothing more than their engaging in SATANISM. Were you aware that they received over HALF A BILLION DOLLARS in funding for their next fiscal year?!?

Were you ever informed thus at any church gathering?!?

On that subject...shouldn't the CHURCH ITSELF be warning us all against ABORTION?!?

ABORTION is NOT about a woman's "right to choose"; instead, it's about a woman being IRRESPONSIBLE, after she (and a WILLING MALE, OF COURSE!) have engaged in an act which, if performed without RESPONSIBILITY and/or ACCOUNTABILITY, results in LIFE BEING PROPAGATED.

There are a lot of ways to avoid WASTING LIFE.

ABSTINANCE iS one, but not a REALISTIC option in this day and age.

BIRTH CONTROL is another, but considering that the female egg is fertile only 36 hours in a month, wouldn't it be better for your body, and eventually your WANTED CHILDREN, that one isn't ingesting inordinate amounts of birth control pills?!? I don't believe that any long term studies have been performed to study adverse effects...and I'm certain that the birth control industry prefers I shut my big yapper before someone gets the bright idea to actually perform said tests.

"SAFE SEX" is another option.

I'm for RESPONSIBLE SEX. ONE PARTNER, EVERYTHING OUT IN THE OPEN. We need to put an end to the JerrySpringerization, the Mauryitis of people's daily lives. It's being made acceptable to ENDLESSLY FORNICATE TO NO GOOD RESULT.

I don't believe that it's an impossible goal. There's much more to life than laying down with others. Anyone whom knows me personally will probably be slightly shocked at such a statement...but I was a late bloomer.

What IS IMPOSSIBLE is believing that TAKING THE LIFE OF AN UNBORN CHILD ISN'T MURDER.

Remember, a LIVE SPERM comes in contact with a LIVING EGG. At no point during this interaction, are there NON-LIVING COMPONENTS.

I made this a HASHTAG, #LBaC (previously, I've used #LIFE #BEGINS AT #CONCEPTION)

I'm going to do something unorthothodox:

If I'm going to add their Twitter handles to this piece, it's only fair to add mine: @C_A_N_S_T

That acronym stands for CHILDREN ARE NOT SEX TOYS, and I've created a hashtag for that as well: #CANST

Feel free to use it to highlight any sort of activity which may warrant intervention of some sort.

Let me end with this: I am UTTERLY DISAPPOINTED with the behaviour of Justice Danny Chun, in regards to his recent decision to keep the INNOCENT John Giuca away from his family until May 1 (should have been April 1, as only a FOOL would persist in this FARCE).

UPDATE: This petition has over HALF A MILLION SIGNATURES!

UPDATE REDUX: SAVE THIS FILE!

A special thanks to VICTURUS LIBERTAS for relocating my lost videos! 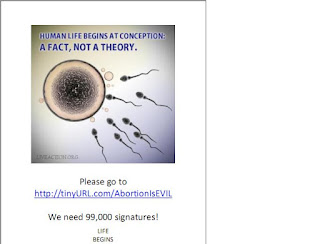