Tonights show guest is Diana West, author of American Betrayal. In American Betrayal, West digs deeper to discover the root of this malaise and uncovers a body of lies that Americans have been led to regard as the near-sacred history of World War II and its Cold War aftermath.
Part real-life thriller, part national tragedy, American Betrayal lights up the massive, Moscow-directed penetration of America’s most hallowed halls of power, revealing not just the familiar struggle between Communism and the Free World, but the hidden war between those wishing to conceal the truth and those trying to expose the increasingly official web of lies.
American Betrayal is America’s lost history, a chronicle that pits Franklin Delano Roosevelt, Harry Truman, Dwight David Eisenhower, and other American icons who shielded overlapping Communist conspiracies against the investigators, politicians, defectors, and others (including Senator Joseph McCarthy) who tried to tell the American people the truth.
American Betrayal shatters the approved histories of an era that begins with FDR’s first inauguration, when “happy days” are supposed to be here again, and ends when we “win” the Cold War. It is here, amid the rubble, where Diana West focuses on the World War II–Cold War deal with the devil in which America surrendered her principles in exchange for a series of Big Lies whose preservation soon became the basis of our leaders’ own self-preservation. It was this moral surrender to deception and self-deception, West argues, that sent us down the long road to moral relativism, “political correctness,” and other cultural ills that have left us unable to ask the hard questions: Does our silence on the crimes of Communism explain our silence on the totalitarianism of Islam? Is Uncle Sam once again betraying America?
In American Betrayal, Diana West shakes the historical record to bring down a new understanding of our past, our present, and how we have become a nation unable to know truth from lies.
Dr. Mike Spaulding
Email Dr. Mike at: pastormike@cclohio.org
Support Dr. MIke’s ministry at: https://www.drmikelive.com

Posted by Vinny from Brooklyn! at 5:00 AM No comments:

Are You Aware That Elijah Cummings Lives In A MANSION, In The Middle Of RAT-INFESTED BALTIMORE?!?

Patricia Dickson is FANTASTIC. Please subscribe to her channel.

I just found her this morning...but she is saying EVERYTHING I would say, if I could keep the VENOM out enough to enunciate it without endless vulgarities.

Back to the headline - he lives in a MANSION, as the denizens of Baltimore fight rats daily as they attempt to live. 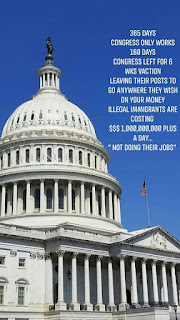 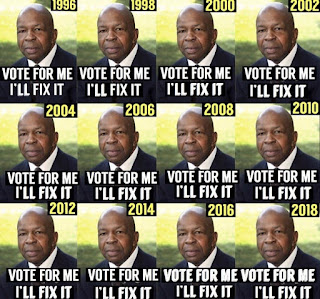 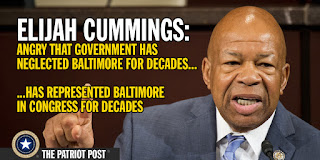 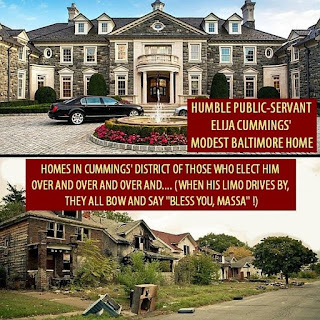 Someone else brought this up: Flint's water crisis wasn't fixed until Trump got in office.

Thanks, Bathhouse Barry. You were a COLOSSAL WASTE.

Have a blessed day, dear readers.

Support the ORBITER initiative. I personally corresponded with David, and he's getting everything together.

Let's all throw out this wicked media, which continues to double down endlessly, regardless of the fact that they are EMPERORS WITHOUT A STITCH OF CLOTHING TO BE SEEN...and they're all GROWERS, not SHOWERS.

UPDATE: I'm going to prove as to how I'm a more responsible journalist than ANYONE ON ABCNBCCBSCNNMSNBCFOX:

The last image does NOT accurately portray Elijah's toney mansion; it's a place in Alpine, NJ:
http://homesoftherich.net/2019/05/the-stone-mansion-in-alpine-nj-re-listed-for-36-million/

The FAKE NEWS regarding memes is simply that the censorship algorithms CANNOT DETECT MEMES. That is why, all of a sudden, they are being targeted.

Well, I say - if you can't back up your assertions, you should STFU.

Let me endorse Paul Romano's promoted hashtag: #JustLetItHappen
https://www.youtube.com/playlist?list=PL9F2dbA8GNYXNIe5I3xO5LE2_UBK2dlqj
Posted by Vinny from Brooklyn! at 6:37 AM No comments:

As Long As There Is ONE MORE BUCK That Can Be Made Through The "DRUG WAR", They Will NEVER Be Legalized

My long-time readers will recall a piece I wrote titled The Octopus Revealed.

The objective of that piece was NOT to point fingers; rather, it was to note that there exists an ECOSYSTEM in which the "drug war" persists.

Did you know that at one time, one could get the finest assortment of drugs right across the street from the Capitol?!?

So - sure, you can get rid of some erzatz dealer...but nature abhors a vacuum, and that dealer is soon replaced.

Now, I don't want to turn America into DopeFiends, N.A.; just like my admiration and steadfast support for the @nd Amendment doesn't mean I wish to turn North America into the Wild West.

Here's the TRUTH: If drugs were LEGALIZED, their PROFIT MARGIN would DISAPPEAR, and EVERY Gang running on drug profits would have to GET REAL JOBS.

The same goes for the guys SELLING FROM THEIR DOMICILES.

That was good for a moment...but I know you expect much more from me; okay- have at it:


I may as well go off. This will either be awesome info, all for my fellow Americans and right-thinking people, or mega cringe. Please feel free to let me know...and if you're nice about a particularly mean point, as you're obviously welcome to do, I will return in kind.


I did a Periscope this morning, all about the Epstein craziness. Everyone needs to grok this point:


Every offering from Hollywood is in furtherance of the destruction of humanity as we know it...and more importantly, they are NOT like us.


It's all coming out. Everyone has witnessed that Meghan Markle, the newest "Princess", did NOT bear that child.


Keep looking...it was impossible, in any instance.


Hollywood has deceived America, and the entire world, since its inception.


In 1931, the Production Code was created. Why, one would ask? Well...
In 1933, Sylvia Scarlett was released which featured the purported "first lesbian kiss onscreen".
In the 50's, monster movies represented sexual repression...in 1958, Silence was released which attempted to show nudity, but was forestalled...
In 1965, The Pawnbroker destroyed Ameerican morals once and for all. Hollywood had snuck in bare Black and White breasts under the guise of a Holocaust film.

You'll recall the 80's where rape was trivialized to the point that we got a lackwit like Robert Chambers, strangling women with their underwear...wonder how many unsolved strangle murders in this nitwit's vicinity there are?


How many dead niggers can you find in Ed Buck's townhouse any evening?


Blah blah...I typed all of that simply to say...who on earth is still watch the idiot box?


It's all SATANIC HOT GARBAGE.


Nothing but TRANNIIES on bloody TV...I cannot unsee them anymore.


I grew up with hot chicks in EVERY GRADE. I know what a REAL WOMAN looks like...I just wasn't paying attention as a kid. You see tig bitties - BANG! Git'er DUN.


I hung with buddies who would go dancing at The World, or hung out in Save The Robots. So, yes, I've danced with drags...fully knew it , every time. Just had fun dancing...that's the bloody idea, yeah?


But...I do NOT abide DECEPTION on the level of Hollywood.


Fuck that, brah. I like REAL PEOPLE. I'll chill here with my peeps, thank YOU very much.


YouTube, simply by virtue of the name, looked to be the vanguard of the new media transition process...then came (((CORPORATION X))) to anally fist an inordinate number of our fellows under arbitrary strikes.


I've been out of work for over three years.


I could be earning money from home, like many of you...but why waste my effort? It'll just get demonetized for some arbitrary reason, yeah?


Scumbags - that is INTOLERABLE.


I fight every day, and one day, my steel toed boots are taking some scumbag's teeth out, metaphorically speaking.


So sorry. No lawsuit for you, poochie.


We The People are the media now. Put up those two fingers. But NOT for Baphomet; for HUMANITY.
Posted by Vinny from Brooklyn! at 4:44 PM No comments: