Yes - you’re getting a REAL POSTING from me today.

I had a fantastic day yesterday!

JUSTICE IS BEING SERVED.
I don’t need to belabor the obvious; what I want to discuss is THE EVIL REALITY OF CHILD TRAFFICKING.
It ends TODAY.
Hey! Want something new to chew on?https://www.reddit.com/r/unpopularopinion/comments/l00jqb/i_think_gmo_foods_are_fine/ 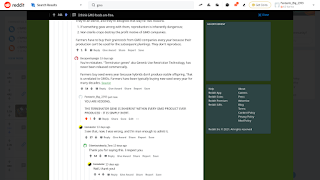 The KNIGHTS OF MARY PHAGAN have been reborn.

What caused this spontaneous generation?

If you’ve never read Animal Farm, but you have listened to Pink Floyd’s Animals...you heard the audio version before they were in vogue.

FULL DISCLOSURE: I had, previous to a concert in a barn, had never heard Dogs.

Fantastic song...but there’s a bit of a DARK SIDE TO IT, isn’t there?

Primarily, it seems to be “misgivings regarding the music industry”, generally...if one doesn’t read further into it.

No more of that crap...important to note...but remember JFK 💥🇺🇸

The song is about CHILD TRAFFICKING IN THE ENTERTAINMENT INDUSTRY AT LARGE.
NONE OF YOU WILL COUNTENANCE THE UNTHINKABLE: YOU ARE GROOMING YOUR CHILDREN TO BE FED HAPPILY TO THESE MONSTERS 🤡😈🤠👿👹👺👻🤖👽👾🤯🤬🤩🥳🤓😜🥺🥰

I will do this in a video, but bouncing off of someone else - can’t do this justice on my lonesome.

The beginning sounds just like any other song...though the keyboard 🎹 emits an oddly eerie tune.

David begins immediately, as if some guy just passing you on the sidewalk suddenly stops in front of you, and yet, you LISTEN👂🏽

The song launches into a deftly concise indictment of the music industry, of which Roger is utterly familiar; the last line is cutting, but not as much as the notes that follow.

The next verse, accordingly, is filled with admonitions.

It’s amazing what REAL MUSIC entails. I should be sure to mention Nick Mason, Richard Wright and David Gilmour, as it was THEIR COLLABORATION that crafted this absolute masterpiece of media.

The song is a day in a life.

On his way home, Pink encounters the ‘conspiracy theorist' and hears his tale. He goes home and dreams of his words. He wakes up, takes care of his dog before getting ready for his next day. Apparently, he has some form of cancer...but it’s a version that metastasizes as HUMAN SIZED PARASITES 💉🧬🦠🧪🌡🧫.

David’s solo is like AMBROSIA. I can FEEL THOSE NOTES FEEDING ME 😋

“And when you LOSE CONTROL...YOU’LL REAP THE HARVEST YOU HAVE SOWN”

THAT IS CHILD TRAFFICKING.

So, without further ado, I present to you, a collaboration of sorts: Joey Dunlop created a timestamp using Pigs 🐖.

I simply remarked that it would be great if he did one with Dogs 🐕.


There is a concerted effort to PITCH BLACKS AGAINST WHITES...but if you pay attention to the Leo Frank trial, you will discover that the rapes of White girls and women in the South were perpetrated by Jews pretending to be White, then blaming it on Black men, then using the "criminal justice system" to OFFICIALLY HANG THEM, assuaging WHITE OUTRAGE, WHILE AT THE SAME TIME SETTING UP BLACK HATRED.

It was a CLEVER PLAN...until I solved the RIDDLE OF THE SPHINXES.


ONCE AGAIN - POSTING WILL BE SUSPENDED - WWG1WGA
THE KNIGHTS OF MARY PHAGAN ARE BACK!
#KMPRISING
Posted by Vinny from Brooklyn! at 8:05 AM 3 comments:

...and because of what Leo Max Frank did to Mary Phagan, we are going to WIN!!!

#KMPRISING
Posted by Vinny from Brooklyn! at 8:46 PM 1 comment:

IT JUST NEVER ENDS
Posted by Vinny from Brooklyn! at 8:06 PM No comments:

Posted by Vinny from Brooklyn! at 9:07 AM No comments:

https://olis.leg.state.or.us/liz/2019R1/Downloads/CommitteeMeetingDocument/168629
SHARE THAT DOCUMENT!!!
NO VACCINES CAN BE MANDATED - EVER!!!

It's all been manufactured
Posted by Vinny from Brooklyn! at 10:12 AM No comments:

Posted by Vinny from Brooklyn! at 11:31 AM No comments:

Posted by Vinny from Brooklyn! at 11:30 AM No comments: